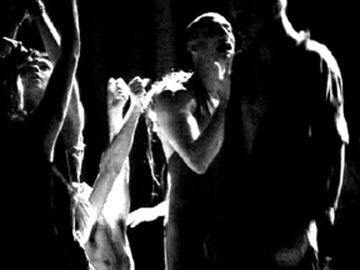 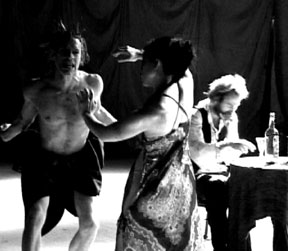 Stereotypes of “ritual” -- pomp, rote actions, formality -- were left behind early on in our experiments and replaced with a more fluid, metamorphic approach. We were after something more alive. With the exception of the repetitive motions in the second ritual (which were recalled from the participants’ actual dreams) none of the rituals were staged or improvised. Something else is happening here. These paratheatrical experiments unfold in their own cycles through sometimes gentle, sometimes violent eruptions, nudging and jolting participants to gesture, action, sound, interaction. These eruptions emanate from the body’s own responses to the charging, or triggering, of energy sources innate to itself, sources we are working to serve, embody and surrender to before your very eyes. The results are unpredictable and run the physical/emotional gauntlet. We don’t know what’s going to happen next. Just when we think nothing is happening, nothing might actually be happening and then: boom! shriek! sigh...another eruption.

The above paragraph was excerpted from the program notes I wrote for the live performances documented in this video, performances resulting from four months of work with a primarily naive group; naive, meaning, new to this medium. The first two months we worked without knowing whether or not we would perform. By releasing the pressure to perform we were free to create our own pressures, pressures which eventually dictated the performance direction.

The themes emerging from our explorations -- initiation, intoxication, shock -- expressed the emerging needs of this group as a whole, needs that informed the design and outcome of all the rituals. I was also committed to serving a unique group unity born, not from a blending of everybody’s energies (which would only produce a bad soup effect) but, from each participant fighting for their own integrity amidst forces -- from within and without -- that would otherwise consume them. As the video attests, sometimes this fight was victorious and sometimes defeat had its way with us.

To me, what matters is the fight itself, the fight for one’s consciousness within a maelstrom of chaos; a drama reflecting, for me, the heroic struggle of any person maintaining their individual voice through society’s deafening cacophony of conformity. A note about the chapter headings starting each ritual in this video. These brief stories were added in the editing process as a way of using the video product to convey another level of the actual performance; none of the performers were aware of these stories. Since 1977, 80% of my paratheatrical group work has been non-performance oriented and done in the sanctuary of total un-media-ted privacy. This video provides a rare glimpse into this process, albeit, under bright lights and the stunned gazes of an unsuspecting audience.

There are all kinds of entertainment out there, and I don't know if what we did qualifies as any kind, but I can say without pretense that I don't believe anyone came away from what we did unmoved. Antero calls it a ritual - a word that I would only use with caution, because it's loaded with such religious connotations. But then again, maybe it's appropriate, because often when someone digs down to the bottom of what they're feeling they uncover a kind of religious or spiritual sentiment... and getting to the bottom of what we're feeling - I think that's what we did.

We weren't so much performing as allowing the audience to bare witness to an experience... I don't know what was going on in other peoples' heads, but I was striving to penetrate through layers of myself, my ideas and my reality, to something more authentic, more immediate. To ignite into pure experience, mediated as little as possible by the mind and its concepts, and to build the greatest possible receptivity to pure physical sensation and impulse, like an electrical charge in my body or animal instinct.

We met twice a week for about four months, a diverse group of people, most with theater and movement backgrounds such as clowning, butoh, acting, singing, Capoeira, boxing, aikido, yoga and kung-fu. We didn't even introduce ourselves by name for the first month, but as each of us committed ourselves to the process of the lab, we got to know each other in ways that we normally never would.

Like actors embodying different characters, we surrendered our bodies to simple ideas that are real and palpable to our lives: the four elements, dream, nightmare, loved, abandoned, etc... We didn't try to demonstratively portray these ideas, and we tried to avoid even reacting to these ideas. If you will, it was like we tried to channel them as forces, or energies at work inside our bodies.

During one of the "performances," I remember moving across the floor next to my friend Paradox, doing who-knows-what kinds of movements and sounds. A delirious laughter erupted from someone in the audience, and it kept on going and going. I think somewhere in the back of my head a self-conscious voice had something to say about it, but I wasn't listening to that voice. Instead, with Paradox I approached the sound of the laughter, like two moths gravitating towards vibrations in the air, its waves moving our bodies... and the laughter kept going and going, filling the room, from this person who was no longer an audience member, but a participant in our ritual...

Often, as I go about my day-to-day stuff, I feel like I've only woken up half-way for the day, interacting with the world like a somnambulist. The only times I'm not just going through the motion, and that my eyes feel really open, seem to be when I'm performing, or in the Capoeira roda, or making art, when all of my attention is in focus. In "Orphans of Delirium" we went into trance-like states. This can be felt, watching the movie. That I think is interesting, though, isn't so much the trance we went into as performers, but how - by juxtaposition - it makes me aware of the trance that I live most of my life in... 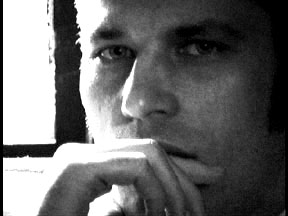 from the Q&A after the 9/16/04 world premiere screening at CELLspace, SF:

Audience Member: You said that this film is going to be out on DVD. I'd like to ask the performers, how do you feel about these deeply personal experiences of yours being out there like that - having this stuff shown in people's living rooms?

We got together for four months and we did this work, and we found these things in ourselves that we never knew were there, these really big, godlike things, much bigger than anything we thought we could be. So the question this film is going to be out there asking people, in their own living rooms, is this: If we found all these things in ourselves, with just a few month's work, then what kind of things are in you, that are that big, that you don't know about yet? 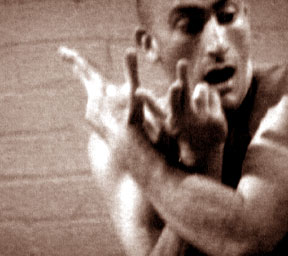