ABORIGINAL NEPTUNE
The Astrological Symbol for the Dreambody
© 2000 Antero Alli 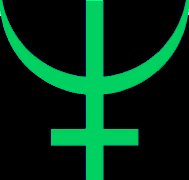 Many indigenous cultures of planet Earth have maintained their spiritual roots through various ritual traditions that help preserve time-honored values. Among these sacred ceremonies are those dedicated to the dreamtime and the positive influence these rituals have on the daily lives of tribal people. From the Australian Aborigine dreaming camps and the Mexican Huichol Peyote rituals to the Senoi dream councils of Malaysia and the Native American vision quests, dreaming ceremonies have instilled daily tribal routines and cultural events with lasting cosmic perspective since before time began. These "dreaming cultures" have somehow kept alive the very elements sorely lacking in our so-called "civilized" western world, namely, the cultivation of self-awareness in dreams and the spiritual nourishment derived from the dreamtime itself.

These spiritual values have been maintained, I believe, by these indigenous cultures by the very sanctuary they give to dreams themselves, which is to say, the space created within the psyche for these experiences to occur and become important. For many of us the value of sanctuary has already vanished from our lives, let alone the sanctuary required for the existence of dreams. Yet, we now live during a dreaming period or transition, that author Jose Arguelles refers to as post-history wherein daily life takes on more and more the appearances and feelings of dreams. Who has not noticed this? How can you tell for sure what is real anymore? Perhaps a more pragmatic question might be: how can you tell which dream is the real dream?

In the western world, America in particular, a culture's dreams--and its collective dreambody--have for the most part been externalized through entertainment, advertising, the multi-tentacled mass media and its interface with America Online. It's almost as if modern society wears its dreams on its sleeves for all to see, while losing touch with that secret hiding place where all dreams originate and return for replenishment. By now the reader may also be aware how the term "dream" is being used in the broadest sense to include all manner of creations springing forth from the human imaginative intelligence and its nourishing dreamtime connections.

Neptune as a Symbol for the Dreambody

The actual glyph for Neptune looks to me from one angle like a lyre, an ancient Orphic harp and, from another perspective, an ascending spirit gracefully lilting toward the heavens. The true meaning of astrological Neptune, in my imagination, drifts somewhere between. Ancient Greek myth saw Orpheus strumming the lyre as a medium for the Music of the Spheres. In other words, Orpheus didn't merely play the lyre; like the lyre itself, he was also played and by larger invisible forces people used to call "the gods and the goddesses."

Neptune's natal placement suggests to me an area where one tends to be a medium for the gods and where one is, in a sense, played by larger forces than one perceives or can perceive. Neptune sits where a completely open-ended, uncensored and all-encompassing merging occurs with the territory its given house placement refers to. The slippery side of natal Neptune, especially when activated, shows where and how you are apt to lose all sight and perspective, where boundaries disappear and how all sense of proportion falls apart at the seams. Like the Twelfth House of its native home, Neptune symbolizes a state of sightless navigation where intuition and faith act as guides and where, in the depths, all becomes law.

With the exception of scattered pockets of children, artists and visionaries, my assumption is that the dreambody and dreamtime connections of western society have atrophied. To the extent there's any truth to this, I venture to say that western astrological systems have also offered up a rather paltry, limited and pathological definition of Neptune mirroring our spiritual bankruptcy. A good example can be seen in the charts of alcoholics, many of which carry hard Neptune aspects; in particular, Neptune squaring or opposing the Sun, Moon, Mars, Venus or Mercury. Alcoholism occurs for many reasons, manifesting in ways similar and different for each alcoholic. One theory of mine is that human beings are possessed by a spiritual need for disappearance; we occasionally feel the need to make things go away. Some people watch too much TV; others meditate. Alcoholics drink. This spiritual need may be stronger in those with strongly aspected natal Neptunes. Maybe a "bottle of spirits" brings the alcoholic closer to the spirit world. It certainly makes his or her presence go away. Ask any child of alcoholic parents....

Spirits in the Material World

This urge to merge with the "spirit world" either expresses deeper mystical yearnings for divinity or a psychic need to escape the confinement of the flesh; the truth, once again, probably wavers somewhere between. The aboriginal view of the dreamtime is that it was never separate from the Earth and never apart from the human body. Guboo Ted Thomas, chief elder of the Yuin tribe of New South Wales, takes his dreaming camps to the mountain because he believes the mountain is where people learn the dreaming. The specific mountain he was referring to is Ayers Rock, near central Australia, where his people have learned the dreaming for almost 40,000 years. "The mountain teaches the dreaming," he told me back in 1986 when we met in the Rocky mountains of Colorado, where he also taught a group of us the dreaming way.

Chinese geomancy, or feng shui, identifies the energies coming from a mountain as powerful YIN energy due to the depth of stillness therein. (Feng shui is an ancient divinatory system for reading the Earth's energies to help determine the most effective way to design houses and gardens for optimal flow of life force.) The placement of Neptune may suggest a similar geomancy in the natal astrology chart in that it may symbolize where the mountain is, where the big YIN energy tends to emerge in our lives and where we are most receptive to the energies that breathe life into us, that inspire us, from the Earth around us and the universe beyond.

People with Sixth House Neptunes look for routines and employment that can double as a "mission" or some larger medium through which the ebb and flow of their dreambody can find expression. First House Neptunes come to know and express themselves as the froth and flux of the dreambody itself and by their penchant for making self-images go away. Eleventh House Neptunes dream of disappearing into group circles of like-minded dreamers to dream up inspired communities of temporary utopias. Seventh House Neptunes dream of sharing their dreams with their beloved while dreaming for the vision to see if their beloved's dream includes theirs, too. Natal Neptune expresses an area with a strong dreaming force, as well as where there exists the greatest potential for disappointment and disillusionment, as well as the potential enlightenment if and when these dreams come true.

Time As You Know It Is All Backwards

"Time as you know it is all backwards," said Aborigine elder Guboo Ted Thomas. "What you call the past is sincerely future and what you call future is sincerely past." From an aboriginal vantage, the future has already happened. "You already became your destiny. You travel back, forth. Dreamtime, daytime. Same thing. They overlap always." The aboriginal model of time may seem as backward to us as ours seems to them. From their point of view, time emerges from what we call the future and moves toward what we call our past.

I asked Guboo about the dreambody. He smiles, knocks my ankles with his didjeradoo (a hollowed-out tree trunk-type wind instrument that creates a low buzzing sensation when played right) and says, "That's it, mister." I felt a ringing in my ears. Was he speaking backwards, again? Or, was it my backwards thinking? "When you sleep at night, you wake up inside your dreams, right?" (My head nods.) "You have good dreamtime walkabout. Go on adventures. Meet other dreamers. When dreamer get tired, go to sleep. Now this dreamer [knocking my ankles, again] wake up. You wake up and think you stop dreaming. Nobody stop dreaming." Throughout Guboo's explanation, I continued hearing this high-pitched ringing in my ears. I meant to ask him about it but didn't. It seemed more like a personal wake-up call than anything my big white mind needed to understand.

If our physical waking lives--our daytime selves--are inextricably connected to our dreams and the dreamtime, as Guboo suggests, then perhaps Neptune could be a symbol for their ongoing intersection. This might explain the "spaciness" factor of natal Neptune; where (the House natal Neptune resides) our experience of the daytime/dreamtime overlap has us going in and out of focus so much. It's also been my experience--in both my own life and the lives of people I've read charts for--that awareness of this intersection becomes enhanced as Neptune transits through a particular House, especially when Neptune aspects the more personal forces (Sun, Moon, Mercury, Venus, Mars, Jupiter and Saturn). These transits seem to have the effect of amping up the intersection for more personal involvement with the multidimensional dreamtime while walking the earth and drifting through dream. This is when and why it can be so confusing to live in a hyper-materialistic culture.

Due to the western world's rapidly diminishing sanctuary and value for dreams, a person can usually only become aware and engaged in dreamtime values with a fairly open mind, a healthy imagination and an unswerving commitment to not just one's own dreams but the dreams of others and for dreams in general. The community, or collective, also dreams. Modern soulwork--what a soul must learn to stay alive in this society--seems to demand a certain ability to create space in one's life, within that society where such values are considered ludicrous, socially defect or, in the more tragic instances of psychiatric commitment, "clinically insane."

If one does somehow manage to cultivate dreamtime values, one must also practice ways to establish their psychological integration not just within the self but through the community. Psychologist James Hillman and writer Michael Ventura (who co-authored We've Had a Hundred Years of Psychotherapy and the World's Getting Worse, Spring Publications; Dallas, TX) rightfully protest the overt self-emphasis of the individual in a myriad of person-based psychologies which exalt "selfhood" over community. In these times, what conscious dreamers need is a community-based definition of selfhood where individuals cease to be "self-defined" and begin viewing community as an expression of self. I am not suggesting simple-minded conformity to community but a vision of others as another version of oneself. The Mayans, another indigenous dreaming culture, have a traditional way of greeting each other when they say, "In'Lakesh," which means, "I am another yourself." Say it outloud. I am another yourself.

Tribal integration of dreamtime values within indigenous dreaming cultures has traditionally occurred through shared artistic expression. In fact, any culture's traditions and roots are usually upheld and maintained by its rituals, its dances, its stories, its songs and music, its poetry, its visual art, its theater and the multiplicity of creative mediums available to all people. Those people who take these mediums seriously enough to practice at them become what the rest of us call "artists." Astrological Neptune then also symbolizes this very artistic and poetic process so necessary for integrating the multidimensional dreamtime with community life in its creation of traditions giving birth to new culture and helping to maintain that culture over time.