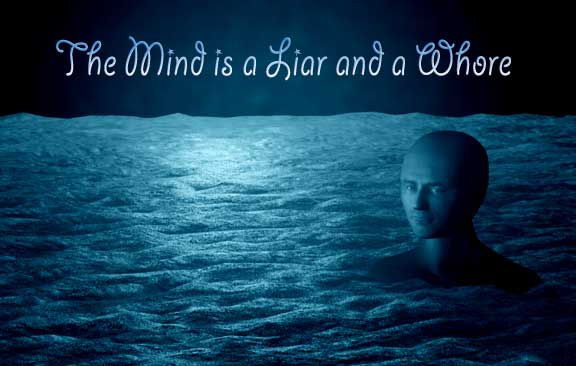 After the completion of my two-year immersion in poet Rainer Maria Rilke's epic lament "Requiem for a Friend", from which my 2005 feature "The Greater Circulation" was inspired, it was time to make a comedy. The depth and eloquence of Rilke's influence induced in me a kind of a dark trance that begged to be broken by satire and laughter. I was in dire need of lightening up.

The idea for this movie came to me after observing the side-effects of the culture of fear in this modern era of domestic and foreign terrorism. I saw how we can behave in reaction to perceived threats, as opposed to actual threats and, how easily the two can be confused during any state of escalating uncertainty. Taking a few steps back, I also started noticing how genuinely funny these behaviors were, especially those based on false assumptions and illusions of entitlement. In our most self-serious furrowed-brow moments, how easily we become creatures of farce.

"The Mind is a Liar and a Whore" is an abbreviated version of the real title of this film: "The Conscious Mind That Has Not Yet Surrendered to What Is, is Becoming a Liar and a Whore". A big influence on my own conscious mind, Robert Anton Wilson (whom this film is also dedicated) had something to do with it. Reading Bob's books, especially his Schroedinger's Cat trilogy, Cosmic Trigger and The Masks of the Illuminati, turned on the reality selection switch in my brain and opened new doors and windows in my mind. The mind can be many things: a mirror, a magnifying glass, a telescope, a microscope, an empty screen, etc. Thanks to Bob, I saw how the mind could be used to also see beyond the mind.

Each of my films have been created with a secret subtext, an underlying esoteric truth, that I never share with the actors or spell out for the audience (though some have scryed it out for themselves). In writing the screenplay for "The Mind" movie, the secret subtext was writing each character as if they were all aspects of one person reacting to an outside shock. Someone who read one of my books, "Angel Tech", asked me if the characters represented each of the eight circuits in Timothy Leary's 8-Circuit Brain model. Though I did not consciously assign any of the eight characters to Dr. Leary's circuits, I admit there may be some unconscious parallels there.

Mostly I just wanted to have some fun and make fun of some very human tendencies, including laughing at myself (note the astrologer), amidst what could become a very real and very dangerous event for any of us in today's world: a bio-terrorist attack in our own city. Anthrax is not funny. A slow, agonizing death is not funny. But if we never get around to laughing at our fears, we may never get around to actually living our lives free of the culturally-imposed, media-saturated psychological terrorism that haunts the current era.

TO "THE MIND IS A LIAR AND A WHORE" main page

TO THE DVD CATALOG page