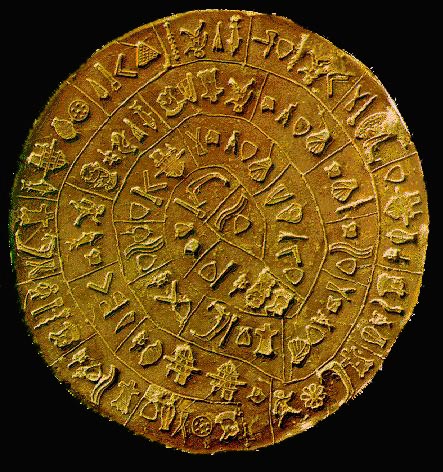 The Phaistos Disk was discovered in 1908 in the ruins of the
palace at Phaistos (or Phaestos) on Crete. The Phaistos Disk is a baked
clay disk, about 15 cm in diameter and 2 cm in cross section, inscribed
on both sides with pictographs reminiscent of Egyptian hieroglyphs.
Surrounding artifacts dated the disk at around 1600 B.C.

The appearance of the pictographs and the type of clay used led
researchers to suspect a non-Cretan origin, but similar signs found
on a bronze double axe at Arkalachori and a stone artifact at
Mallia tended to contradict this theory. It is now commonly
believed that the disk is native to Crete.

Some claim success, but no one has yet proved their ability
to translate or even to identify with certainty the language of
the Phaistos Disk. Whatever the mysteries of the disk's inscription,
it may be even more interesting that the pictographs were stamped into
the disk rather than written. Thus far, no other stamped objects have been found.